Throwing Out the Underpants

Ragen Chastain is one of my heros. Let's get that out of the way first and foremost. She's amazing and awesome and I could not be more excited or honored that she even knows I exist. But, since we're all individuals we're going to disagree on some things. And one thing that's always always bothered me is the underpants rule. Well, not all of it. Let me explain. The Underpants Rule basically states that you are The Boss of your Own Underpants. This means that you don't get to tell me what to do and I don't get to tell you what to do. This is particularly used in, you guessed it, fat acceptance circles where Ragen is pretty much a celebrity.

Okay, great, I mostly agree with that rule! Except for when it comes to harmful behavior. And when I mean harmful I mean perpetuating social stigma and bigotry or something serious that may result in very real physical or psychological harm being done. For example, I'm not going to tell you how to dress, but I am certainly going to intervene if you, say, tell me that you're suicidal, or have an eating disorder, or something like that. I'll try my best to talk you out of it. You may be the boss of your own underpants, but that has a huge limit. Most people agree that self harm such as suicidal ideation is a point at which someone should intervene and stop saying "your choice, do what you want".

Well, I've been an activist for a long time, even before I found fat acceptance issues to advocate for, and I've always stood up to someone who is bigoted. In my opinion your underpants stop being your own when you're hurting other people. Which is why I wrote the post that I did about weight loss surgery for example. So while proponents of the underpants rule say "you can choose to lose weight if you want to because they're your underpants", that's past my threshold. I say, you're perpetuating fatphobia and thin privilege and therefore you need to be talked out of it/ stood up to. It's not just fatphobia I apply this rule to. I don't stand for any kind of bigotry, especially from my friends and people that I love.

So I'm sorry, but I"m going to advocate for throwing out the underpants, or burning them, or whatever you choose to do with those underpants that keep you from being the best advocate and activist that you can be. Because while sometimes it's prudent to keep your opinions to yourself, sometimes it's necessary to share them and to get people to change their way of thinking. When I was bragging to a friend about getting my calories under x amount and she introduced me to fat acceptance, it changed my life. If she'd just decided to let me lose weight (which wasn't working anyway) and not say anything, then I'd still be hating myself and perpetuating and defending fatphobia.

Some people empathize with people wanting to lose weight in a way, saying that thinness holds a good deal of privilege and therefore it's understandable that it's desirable and they're right, it does. But I wholeheartedly believe that privilege is a bad thing and wouldn't exist in a truly egalitarian world. We should reject privilege and do our best to educate people against the privileges that we do posses. So yeah, thinness will give you privilege (however temporary), but by specifically trying to attain privilege you're perpetuating bigotry. Privilege only exists because oppression does as well. Ending bigotry should be our number one priority. Sorry underpants.
at June 26, 2014 No comments:

These are a few of my favorite things

So I decided that there are a few photos that I've taken over the years that are my absolute favorites. And I want to share those with you. Some are nude, some aren't, but they're the ones that make me thankful for being involved in this art.

I'll start with my absolute most favorite from my first nude shoot by Mikel Allen. This shot was done when I had dermographia (something that since has gone away with the use of steroid injections.. what a shame). Dermographia literally translates to skin writing. It's a histamine reaction which causes welting when pressure is applied, hence the ability to write on a person's skin. This one was my idea- I wrote "Basic Kindness" on my arms and, to this day, I believe it's such a beautiful and powerful message that it holds a special place in my heart. 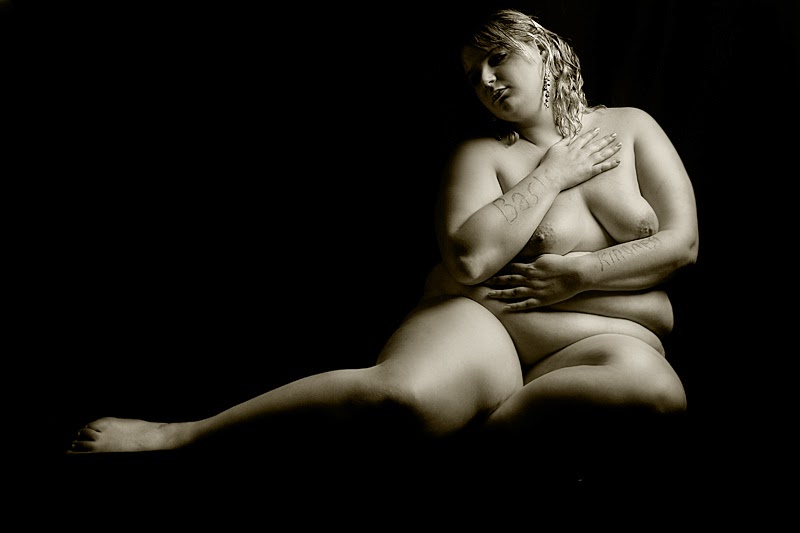 This photo got a lot of attention when I originally posted it and you may be able to see why. The feeling of serenity and weightlessness floating in the middle of a lake is a hard feeling to beat. My belly floats above the surface and looks beautifully round. This photo by Michael Lanning was a fun one to take. It was autumn and Getting in the water made my skin go instantly numb. What's more, when I laid back and my ear drum hit the cold water I became immediately dizzy. Trying to get a look of relaxation in that environment was tough, but the result was beautiful. 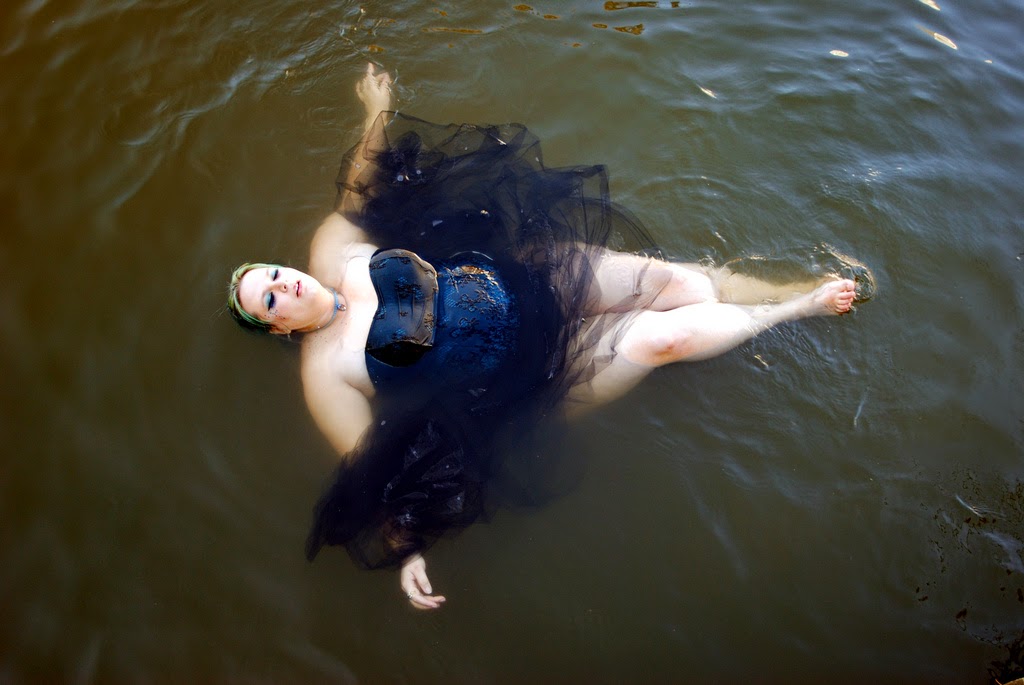 This next photo was an exercise in self acceptance. My backside, wonderfully dimpled, was something I didn't spend a lot of time looking at, but Travis McKeithan brought a beauty to it in this black and white photograph that's hard for me to get over. It made me fall in love with every little dip and curve. 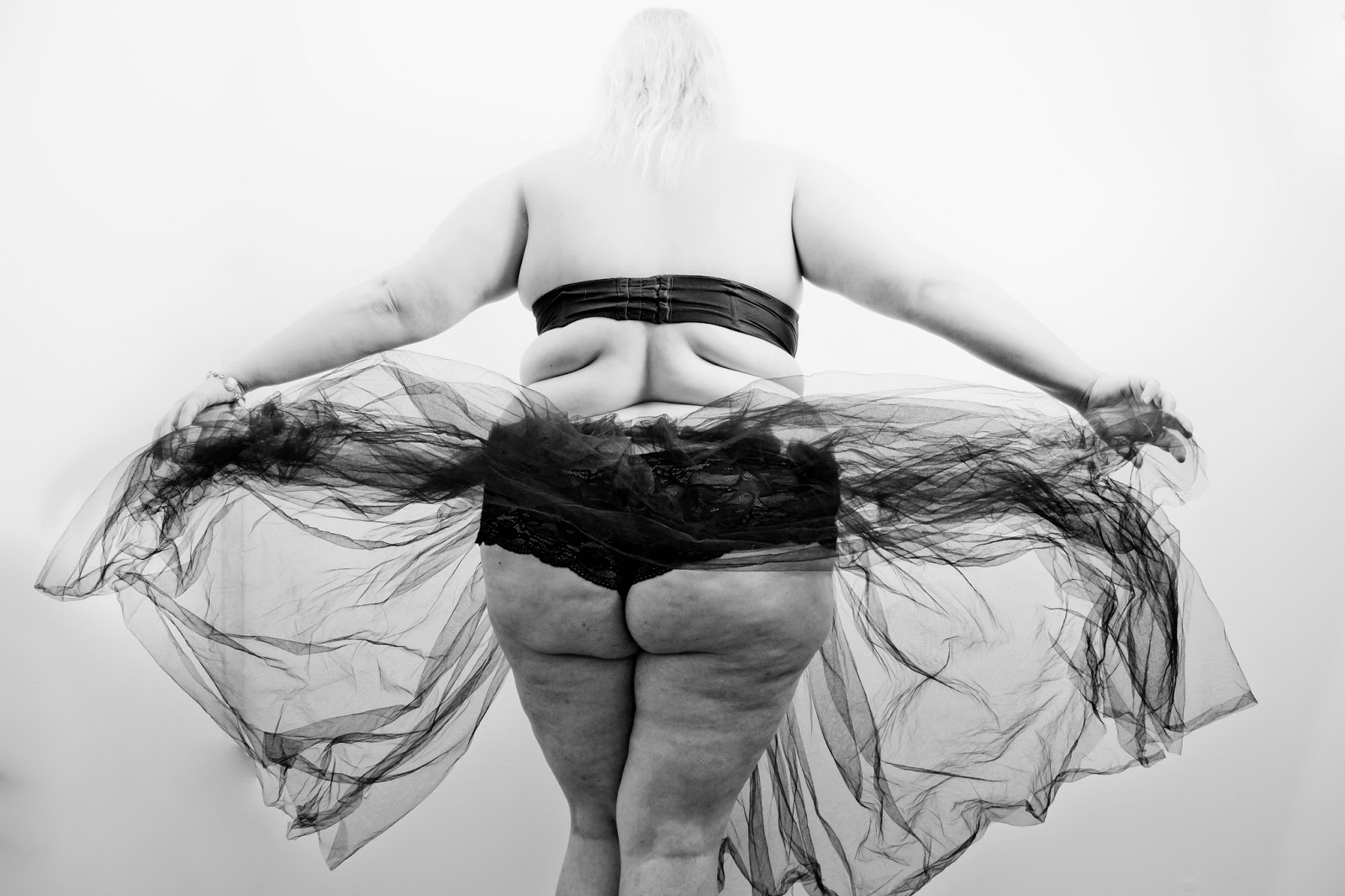 Another black and white by Dan Smith displays my body against a backdrop of light. You may have guessed that I'm completely in love with my black tulle skirt as I've used it in several photoshoots. Dan managed to capture a beauty in my curves that I had never seen before. While publishing these photos was indeed difficult, it was also empowering and wonderful. 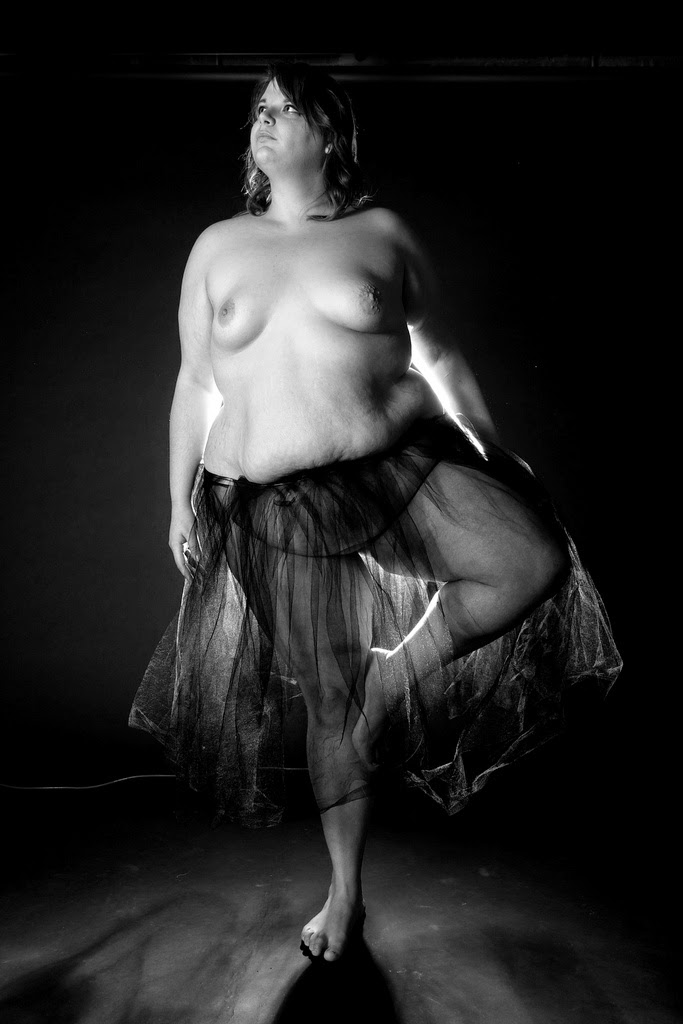 This next photo by Bryan Regan is yet another nude (I sense a pattern here). The theme was "oil painting" and was done with light painting. The result is a stunning piece of art that is reminiscent of  many classical paintings done with larger women. While the photo is not inherently sexual I feel like there's a deep sensuality to the dips and peaks of my body that make me feel like a masterpiece. 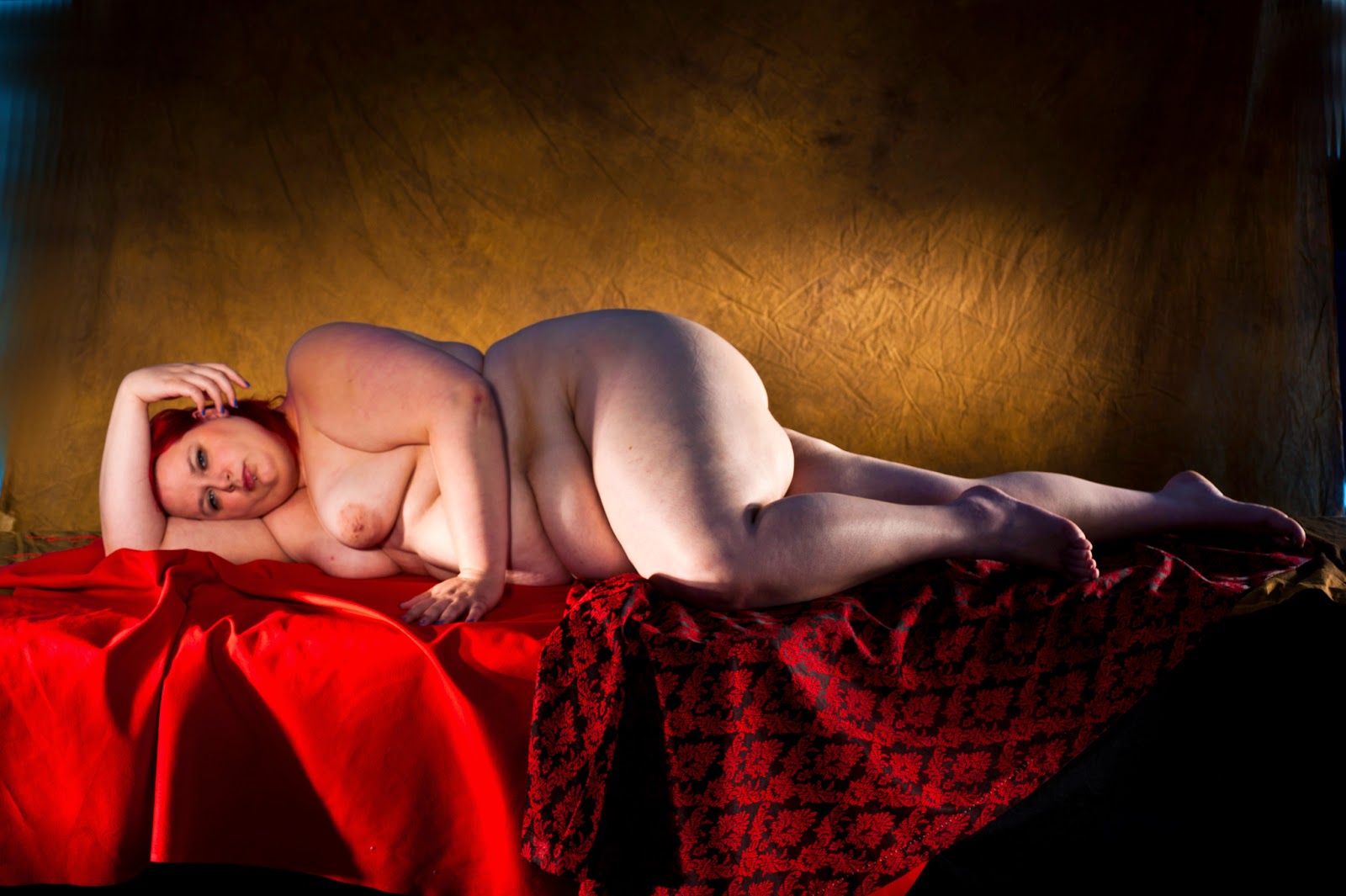 This is another by Travis McKeithan. We played with light and shadows and the result was dramatic and fascinating. This one more made me appreciate the contours of my own face. Fat acceptance has been my main goal but sometimes that includes the face too. Sometimes feeling too round, I've learned to love it as much as my body. 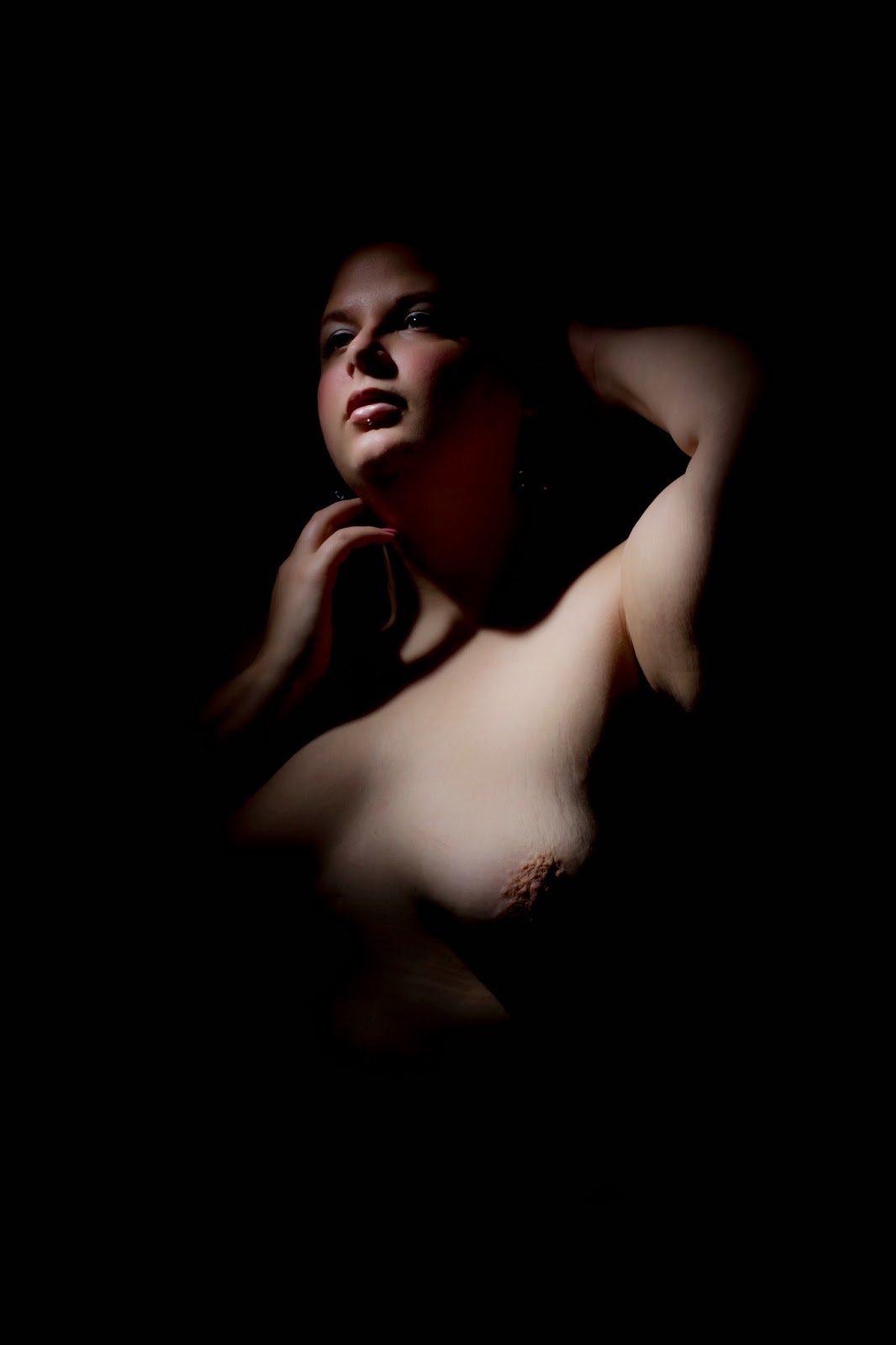 There are many more photos that I love, but these are some that leave me in awe. I hope you enjoyed them as well and my hope, as always, is to inspire others to love and appreciate their own bodies in a world which demonizes them and refuses to acknowledge, let alone represent, larger bodies.
at June 15, 2014 4 comments: