No doubt, by now, many, if not all, of you have heard about Marilyn Wann's I Stand project. If you'll remember, the Georgia anti-fat group, strong4life, posted ads around the state shaming fat kids. Well, Marilyn and a small team of photoshoppers have joined forces and created dozens of protesting posters with people of all shapes and sizes stating what they stand for or against. The amazing Pattie Thomas has made a great slide show of many of them and there's also a tumblr!

For me, strong4life's campaign as well as Marilyn's I stand campaign are personal. I was that fat child and the bullying from peers, family, the media, and even strangers contributed to a decade long struggle with an eating disorder, self destructive behaviors, and severe depression. So for my poster I wanted to specifically address the increased risk of eating disorders and suicide associated with weight stigma and weight bullying. You'll notice the word 'love' written on my arm as well. The TWLOHA organization (to write love on her arms) is dedicated to awareness of depression and self injury. The majority of people know someone who self harms or has, whether they know it or not.  These are two very important issues and I'm happy to be part of this project.

If you want to participate email a photo of yourself and what you stand for or against to Marilyn Wann at Marilyna@fatso.com. make sure the photo is a reasonable size! 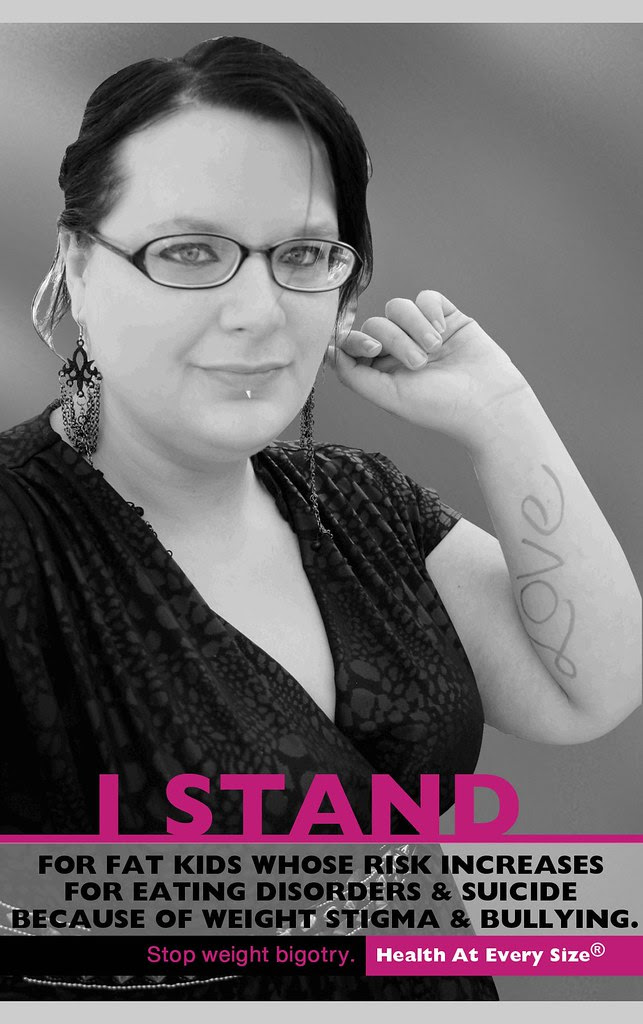 All photographs by Bill Welch Sr from a group shoot at the Health and Beauty Institute with the North Carolina Photography Group. I had changed out of my ballgown back into my casual clothes and Bill took a few photos against the blue wall. These are cute and just for fun so expect some silliness! 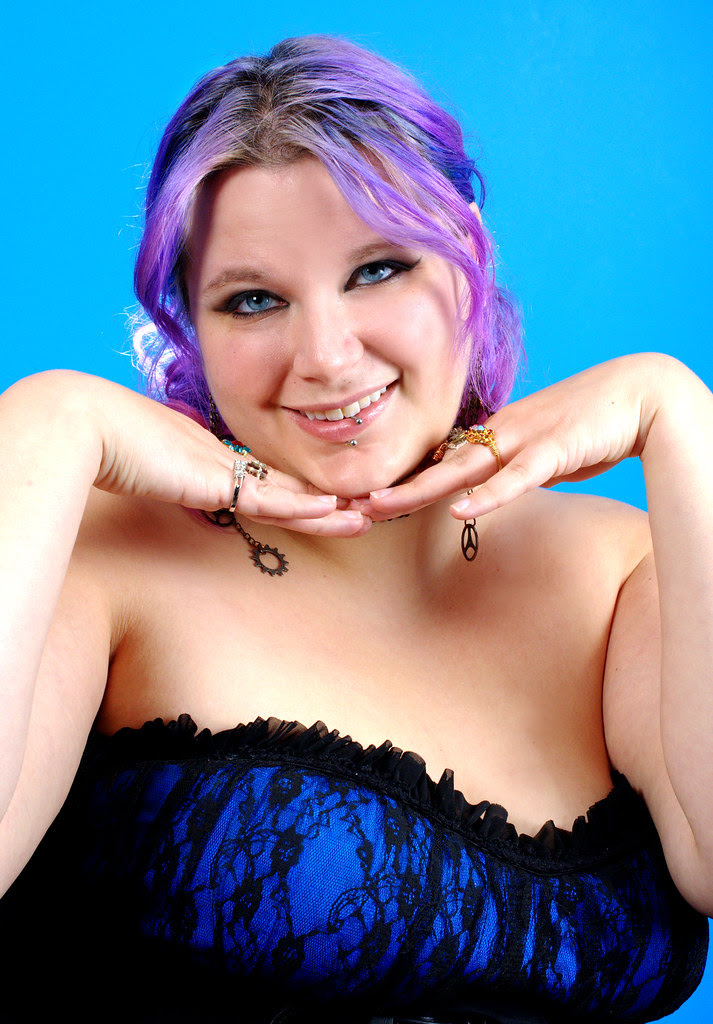 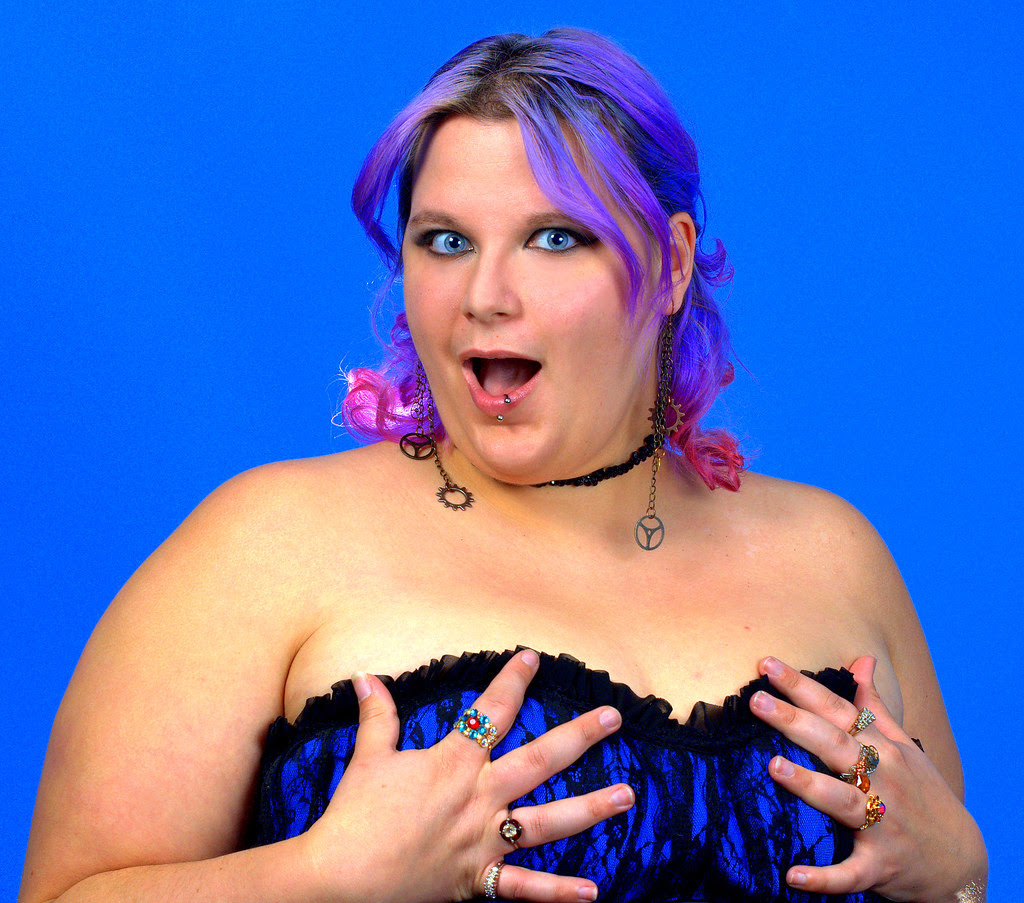 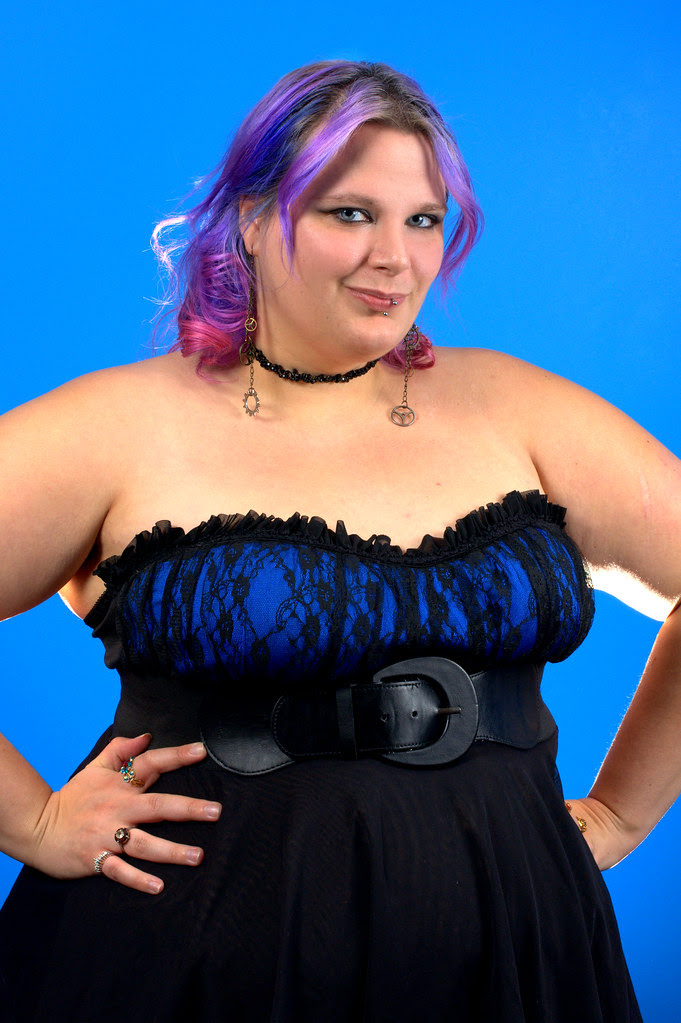 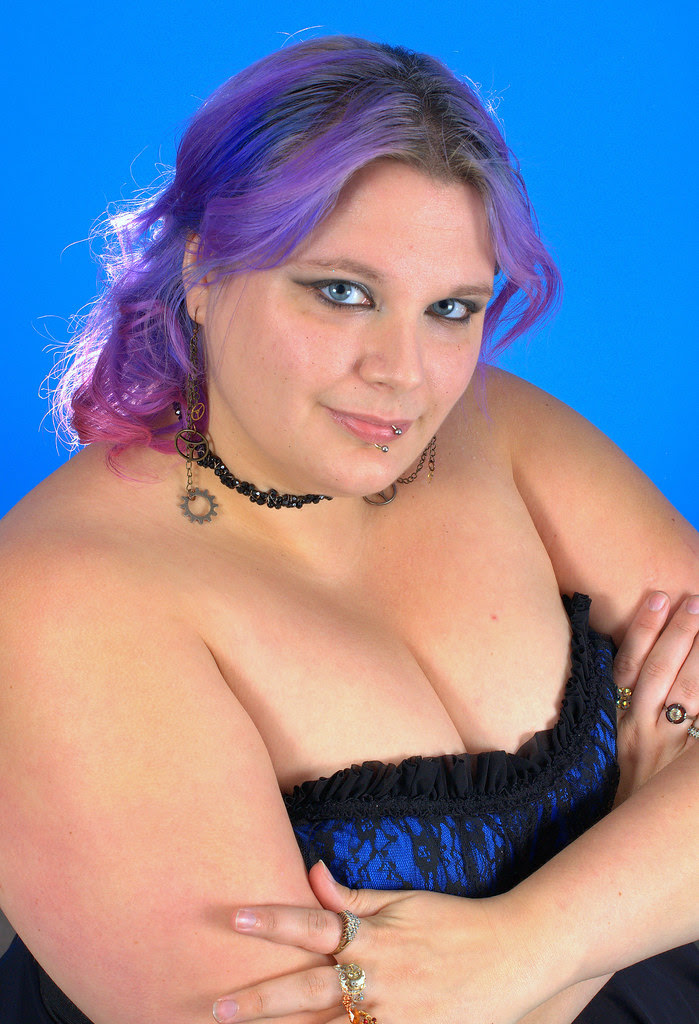 I went to a great group shoot in High Point with a ballgown theme. I worked with a lot of photographers and many fantastic model friends were there as well! Some gr oup shoots can be a struggle, but this one was an absolute pleasure. Because I don't get all of the photos at the same time this will likely be a part one post. Though I love all of the photos I've received I will only pick one or two from each photographer to show on this post. Also, this is not only the first photo post of 2012, but also the first shoot with my new lip ring :) What do you think?! As usual, all images are copyrighted.

It's hard to be a little girl when you're bullied

I realize this is the billionth post you all have seen about the Georgia ads which bully fat children. In case you've just happened to have had a prior engagement under a rock and are only now emerging from the gala, here are the ads that the fatosphere has been buzzing about: 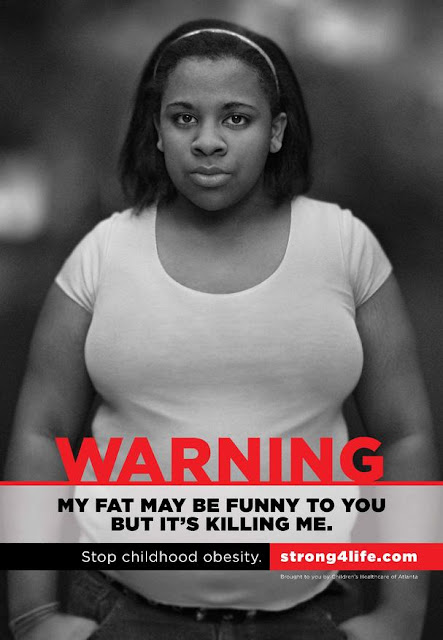 The videos on the website show Bobby (above) in black and white sitting across from his (also fat) mom asking, "mom, why am I fat?".

Tamika, the girl in the last photo above is seen in her video fidgeting uncomfortably in front of the camera with her (supposedly) mother saying, "Being thick runs in our family. As her mom, I never noticed Tamika eating any different from the rest of us. She likes junk food, but what kid doesn't? When the doctor said she had type two diabetes, I never thought what we eat made her sick. I just always thought she was thick like her mama.

Tina, the girl on the right in the third photo above says, "I don't like going to school because all the other kids pick on me. It hurts my feelings."

Maritza (not pictured) is a girl of color and says, "My doctor says I have something called hypertension.. I'm really scared"

Lastly, Jaden (also not pictured), a boy of color says, "Playing video games is what I like to do by myself. I don't have to be around the other kids.. cause all they want to do is pick on me"

If this is the first time you've seen these ads, it may take you a moment to take it all in. Other than the fact that fat people can be just as healthy as thin people, some of these are downright absurd. They're not based in fact and they're downright stigmatizing and bullying. These things are why fat children are more at risk for eating disorders and suicide. Let's go through these things one by one.

"Chubby kids may not outlive their parents"
This is a bald faced lie. Firstly, "chubby" is not the same as fat as we already know that those in the "overweight" category live the longest. But when they say chubby they mean fat, right? But according to the same study (as the 'overweight' live longest study) obese people live just as long as normal weight people- the same study says that obese patients are even less likely to die from heart disease and that the healthiest fat people were people who were fat when they were.. *ding ding ding*!... kids! More so, according to the predictions on life expectancy- it's still going up.. no worries.

"Fat kids become fat adults"
Excuse my language but, no shit sherlock. That's because genetics play a pretty big role in weight and there's more than one gene that helps out. This is what makes this kind of fat shaming particularly cruel and useless.

"Big bones didn't make me this way. Big meals did"
Ahem- except that no study has ever shown that fat people eat more than thin people, although a few have shown that fat kids eat less than thin kids. In other words: liar liar, pants on fire.

"He has his father's eyes, his laugh, and maybe even his diabetes"
Considering that diabetes is genetic then yeah, he just might. If the kid was thin (controlling for lifestyle) he'd have the same risk. Did anyone see Captain Obvious sail by?

"75% of parents of overweight kids ignore the problem"
Well this is the first good news I've seen- that means that 75% of parents are (hopefully)  not being assholes and fat shaming their children, instilling in them lifelong body image issues. Of course, we have campaigns like this to do this for them.

"Fat prevention begins at home. And at the buffet line."
I'm sorry, but what...? Because thin people never eat at buffets? Or are we just assuming they have more self control? Wait.. didn't we just say that fat kids eat less than thin kids? Yes.. yes we did.

I'm skipping the next two because I want to talk about them a little more in depth. So the next one is, "My fat may be funny to you, but it's killing me." Excuse me, please show me any evidence that fat directly kills anyone. Lack of exercise, poor food choices, lack of health care, discrimination, bullying, weight cycling, weight loss drugs- those things may be killing you, but fat certainly isn't. How many times do we need to repeat that one can be fat and healthy or thin and unhealthy? The thing is- this is Georgia's poverty rate is at 14.4-  it ranks #5 in states with the highest poverty rate. In fact, if you look at the fattest states and the most impoverished states, there's quite a crossover. Stress, depression, lack of medical care, lack of access to nutritious foods or safe areas for activity are all issues that may contribute, but one thing is for sure; the war on obesity is also a war on woman and a war on the poor.

Okay, let's go back to the two we skipped:
"It's hard to be a little girl if you're not"
and "being fat takes the fun out of being a kid"

These two really caught my attention because I was a fat kid and I have an excellent memory. Being fat never interfered with me being a kid. I wouldn't have even known or cared that I was fat if people didn't point it out to me. To me, I was just a kid, swinging, climbing trees, and playing Star Trek during recess with my best friend. If you take out all of the bullying, the abuse, the attacks, and the nasty "well meaning" comments from adults ( in other words, still bullying), then being fat has absolutely zero impact on my being a kid or a little girl.

What did make it hard to be a little girl and what did take the fun out of being a kid was fat stigma, discrimination, and bullying. In other words, ads like this. This campaign accomplishes the very thing it speaks out again- making kids miserable. A lot of their campaign hinges on how fat kids get bullied and how much that sucks. Yes, it does suck. But let me tell you, fat kids aren't the only ones who get bullied. When the news picked up stories of gay kids killing themselves and homophobic bullying did we see state and nation wide campaigns to cure homosexuality? Did I see any ads that said, "I don't want to go to school. The kids make fun of me for being gay" with "stop the homosexual epidemic now" stamped across the bottom? As a member of the lgbt community I would have been outraged just as I'm outraged now at this kind of fat hate. In any other circumstance we create sensitivity programs, anti bullying campaigns, and massive awareness campaigns to combat the problem. But with fat kids? We blame them, blame their parents, tell adults that it's their job to bully them (and other adults) and all because it's good for them. I can't think of a single form of bullying that is as socially acceptable and even encouraged as the bullying of fat people. I hope the parents of these children realize how detrimental this is and I hope the children themselves can grow up to find the fat acceptance movement and throw off the horrible abuse that Georgia has perpetrated against them.
at January 09, 2012 7 comments:


Happy New Year! Wow, is it 2012 already? 2011 was a special year to me; it was my first full year of body acceptance and fat activism. My first exposure to fat acceptance was in October of 2010 so most of my year was spent hating my body with horribly destructive habits. In 2011 I got to go through it all- making new friends, having to move, parties, holidays.. all being fat and happy the entire time. Wow, how completely liberating! 2011 was a good year for me.

No, I don't have a new year's resolution and I don't plant to. Most resolutions fail (I wonder how much of this failure is because one of the top resolutions is weight loss which, itself, fails 95% of the time?) and most are focused on our flaws and what we need to change about ourselves. More so, though, it sets you up for disappointment if you can't go through with it. I feel confident that I can change and progress and do some awesome things in the coming year without making promises to myself or anyone else . This year, I'm going to try to just be. I get the whole 'new beginnings' metaphor, but really.. any time can be a time for new beginnings and any time can be a time for progress and change.

If you're going to make a resolution, make it to love, respect, and appreciate your body more from now on. And that's a goal that's good all year round. This is a time for diet scams and false weight loss promises- so counter it with some of your own fat activism
at January 01, 2012 No comments: