Today's photos brought to you by the North Carolina Photography Group and After Hours Tavern in High Point, NC! This night was really just great fun. I wasn't surrounded by photographers or anything like some of my friends, but I was kind of busy dancing on the stage and singing along to Sweet Home Alabama. There's definitely an upside to a shoot taking place in a bar. Not only did I meet a couple of new photographers, but I met some fantastic new models. It's been about a year since I started modeling and I'm amazed at how many wonderful friends I've made in that time.

You know, it's interesting to participate in some of these shoots as I also talk about the problem with the objectification of women. But, of course, objectification means that you strip away the personality, the nuances, and the humanity of a person and see just their bodies, you see them simply as, well, objects for your own personal use. I'd hope that every single person who follows my blog or even just comes to visit sees me as much more than that. I share with you  my fears, my ambitions, my passions, and,  I'll just say, that if someone can really ignore all of that and see me as nothing more than a virtual blow up doll, then that's on them, not me. A woman does not invite objectification or sexual harassment regardless of how she dresses, what kind of lifestyle she has (a girl who likes to party in mini skirts is no more an object than a conservatively dressed house wife), or how she presents herself. The choice to objectify lies solely with the person doing the objectifying. Every photo you see, regardless of how attractive you find that person to be, is an actual human being with a life outside of the limited experience you've had of them. Never forget that- they don't exist for you, they are their own people with their own lives and their own bodily autonomy.

Okay, so with that little mental wandering out of the way, let's get to some photos!

Fellow fat activist, male blogger, and feminist, Brian from Red No. 3, wrote this piece about the difference between attraction and objectification. The reactions seemed fairly typical- from various places I saw it posted it seemed to be (mostly) women who said "Right on!" and (mostly) men who said "Hey wait a minute... you can't tell us who to be attracted to!" (Go ahead, take a moment to face palm). Some people didn't seem to understand the difference between objectification and attraction. A few people expressed some confusion on how to tell a woman that you like her without walking up to her and saying "hey sweet cheeks, more cushion for the pushing I always say *wink wink*".  This is called sexual harassment guys. This issue, of course, crosses over with feminism as well as rape culture, so I'm going to tell you how to tell that girl that you're interested without sexually propositioning her.

First, let's set up the scene. You see a woman and you just feel the chemistry. You have to ask her out or at least let her know that you think she's gorgeous.

Acceptable places to approach a woman:


Unacceptable places to approach a woman:


Okay- great! Got that? If you like her you don't want to scare her. I know you think she should assume you're a nice guy and has nothing to be afraid of, but chances are high that she or someone she knows has been sexually assaulted and she doesn't know you from Adam. By the way, these tips can be used on approaching men as well. While they're certainly less likely to face sexual assault, better safe than sorry and it's your job (yes yours since you're the one doing the approaching) to make them feel as safe as possible.

So now let's move on to what to say. How on earth can you tell a woman you think she's the bee's knees without telling her explicit details of your sexual fantasies? Easy! Just don't do it! When thinking of sexually harassing or objectifying someone, follow the same procedures that you would if you were thinking of raping them- just don't do it! Don't try to blame them- don't say they deserve it because of what they are (or aren't) wearing. Don't justify doing it because you "know she secretly wants it".

Things you can say:

Things not to say:
Keep in mind that these rules apply on the internet as well. Sending a woman of a photo of your dangly bits is sexual harassment as much as flashing her on the street.
But wait, you say, what is objectification anyway?
The simplest definition is treating someone like an object. Sexual objectification is reducing a person's role or being to a sexual one, disregarding their intelligence, feelings, or other aspects which make up a complete human being. Fat women in particular often get fetishized. So what does that mean? A fetish, in simple terms, is an object, body part, of characteristic that is needed for sexual gratification. So a fat fetishist is sexually attracted to a person's fat. I've seen this come across as specific body parts as well- belly, thighs, back rolls, arm fat, etc.

Someone, in response to the whole idea that women shouldn't be treated like sex objects, specifically women who dare to have an online presence or post photos (on facebook, flickr, blogs, whatever!) should expect to be objectified- that it's common. Yes, indeed it is, but something being common doesn't mean it should be common. And it doesn't mean that no one should speak out against it. All you have to do is treat women with respect and don't think of them as sex dolls! A great post on tumblr said "My actions will never control your actions and my actions will ever absolve you of responsibility for the things you do and say to me." Now, with that in mind, you have all the tools you need, go ahead and approach that cutie!

A Special Note on The Definition of Pride

"Fat pride? Fat people have nothing to be proud about! They didn't accomplish anything by being fat!"

The first time I heard this phrase the word "black" was used instead of fat. The second time? It was "gay". Sadly, the first time I was still in high school and I nodded in agreement, in my head trying to figure out why "black pride" was okay but "white pride" was racist. Thankfully, I managed to shake off that particular idea many many years ago as I became an adult and began recognizing that we did not, in fact, live in a post racial society as so many white kids and teens are taught. The first time I had to defend any sort of pride was in reference to gay pride. This was the point at which I realized that we were using two different definitions of pride.

See, words have a lot of meanings. It starts with one or two and picks up more over time.

Pride: pleasure or satisfaction taken in something done by or belonging to oneself or believed to reflect credit upon oneself: civic pride.

a high or inordinate opinion of one's own dignity, importance, merit, or superiority, whether as cherished in the mind or as displayed inbearing, conduct, etc.

Proud: having or showing self-respect or self-esteem.

*(I nixed the repetitive definitions).

So the people who seem to have a problem with "pride" movements focus on the definitions that reflect accomplishment, doing, something. Like being proud of a job well done, or being proud of building something, or being proud of a practiced skill. But pride movements have more to do with the last definition- having or showing self respect or self esteem. See, we're not proud of being fat. They're right, most of us didn't actively put effort towards becoming this way. It's pride in yourself for daring to be okay with who you are when the rest of society tells you that there's something wrong with you.

But it's more than that. Because there's pride for accepting yourself and then there's the pride that you feel when you actively stand up for yourself and others who are oppressed, subjugated, stigmatized, and hated. You're proud, not of being fat on it's own, but of having the courage to not care, the courage to face a world every day that does it's best to beat you down. Pride for making positive changes in yourself, your loved ones, your community, and society. When even showing your face in public is an act of rebellion, when being happy as a fat person is a political statement, when just living your life happily in your own body is against everything that the bigots want you to do, then that? That's something to be proud of.

So no, fat pride isn't about having pride just for being fat, it's about fighting an oppressive culture through every tiny act of self acceptance.
at November 12, 2011 4 comments:

This drawing is by Omari, an artist from Brooklyn, NY. I have to say, I really love being drawn. For this I simply had my husband take a photo of me in the pose that the artist asked for and then emailed the photo to him. He has all different sizes of models in his portfolio, but the best thing about them is how real the bodies are. They aren't just super thin or fat or a certain shape of body. I think most women will see themselves in at least one of the drawings done. 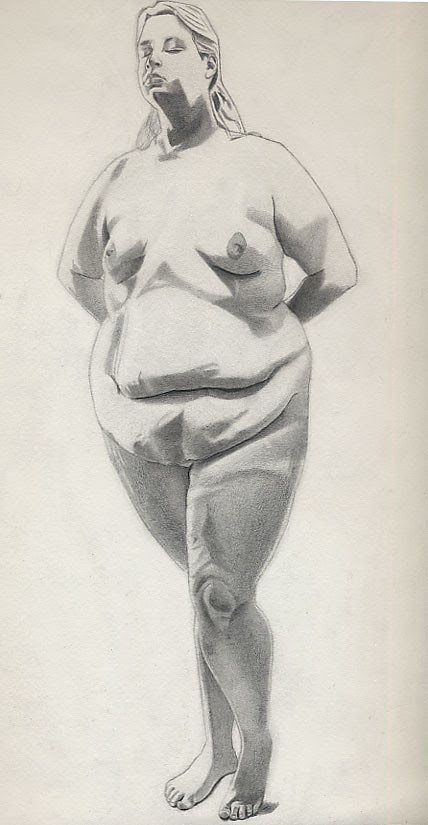