As you  may have already heard from your favorite fat bloggers, today kicks off the Weight Stigma Blog Carnival in order to raise awareness for National Weight Stigma Awareness Week which takes place September 26th-30th, created by the Binge Eating Disorder Association. The Blog Carnival is being done by Voices In Recovery Anyone can participate in the Blog Carnival so jump in and join me if you have a blog! So this is blog 1 of 3 from now until September for this particular event.

Today's topic: What does weight stigma mean to you?

Let's see if I can properly gather my thoughts on this. Apologies in advance for any rambly-ness as this wasn't a planned post.

To me, weight stigma is a form of systematic oppression. There are a lot of components that include fatphobia, sexism,ableism, and homophobia. Fist I'll point out that the majority of body shaming and weight stigma is perpetrated against women. Reducing women to their bodies, to how sexually appealing they are, is simply another means of controlling them. In our society a woman's body is pretty much free for public commentary.  Our bodies are constantly a source of debate. Weight stigma is used to judge our sexual worth, our value as "real" women, our to ability birth children, and even our fitness as parents. Women have a narrow range of body shape or size which is socially acceptable and there are very few places where we don't see weight centered issues specifically targeted at women. I'm sure you've noticed that the vast majority of diet ads, for example, target women.

That's not to say that men aren't also effected by weight stigma. When male bodies break gender norms by being either too big or too small, then you suddenly get a heavy dose of homophobia thrown in when these men aren't seen as "real" men.

So what does weight stigma mean to me? It means discrimination and oppression and control and ruining a lot of peoples' lives. It's control on so many levels because it encompasses so many topics and groups of people. The diet industry brings in (come on, we've heard it enough- we can all say it together!) 60 billions dollars a year. If that doesn't shout control I don't know what does. People are so desperate to conform to the right body type, and the right size that they'll do almost anything, listen to almost anything, believe almost anything just to reach that goal. The best way to control someone is to break them and weight stigma has done a great job of that.Weight stigma is violence against women (among other groups, but primarily women) and is part of a larger culture of misogyny.

Of course, that's not all that weight stigma is, but it's an important part and my brain just sort of took it and ran with it. So what does weight stigma mean to you?
at July 27, 2011 No comments:

Don't They Know How Unhealthy It Is?

That's right, I'm talking about tall people! According to a recent study, tall women (women over 5'9") were almost 40% more likely to develop ten different cancers! And your risk of cancer increases by 16% with every four centimeters of height! It's time to talk about this tallness epidemic and it's consequences. According to the National Cancer Institute, cancer care accounted for an estimated $104.1 billion in medical care expenditures in the United States in 2006. So why are we getting taller? Height has been increasing consistently in industrialized nations for the past 150 years and scientific resources all agree that nutrition plays a big part in that. In other words, people are eating themselves to a cancerous death! Tallness is a huge burden on the health care system and people who are overly tall are just plain immoral for putting their friends and family through the emotional turmoil of their possible early deaths.

While it's true that there's a genetic component to height, nutrition is an important factor. It's clear that we have to do something about this. Children and adolescents specifically who are at an increased risk for tallness should be put on nutrient deficient diets in order to try and hinder dangerous vertical growth. (Won't somebody please think of the children?!) Some people may claim that they can't help their height or even that their are illnesses that cause tallness such as pituitary problems but it's just a cover up for their gluttony. They're simply in denial that they have control over their height.

I'm anticipating the creation of a whole new industry to help these people who don't seem to have the willpower to help themselves (and really, tall people are just gross to look at). From pills that help you get shorter to diets that help you from getting tall to begin with. The diet industry makes 60 billion a year- think of all those jobs! It's simply unAmerican not to create an industry around making tall people shorter or keeping short people short... for their own good of course. I'm really super concerned about their health and the well being of their families. Do you know how expensive cancer treatment is? Tallness is simply irresponsible, despite what people in the "height acceptance" movement claim. Heightism is completely BS- there's nothing wrong with discriminating based on height- they're doing it to themselves anyway!

Stay tuned for my next post on lefthandedness! Studies show that being left handed can take up to a decade off of your life! Those disgusting lefties!
at July 27, 2011 3 comments:

Celebrating the Female Form- How Not to Do It

I was browsing casting calls this past weekend when I came across a call for bodyscaping. Bodyscaping, if you're not familiar is photography done of parts of bodies. Accentuating curves and lines like you might a landscape. The rise and fall of the breasts, the curve of the back, the lines of arms and legs or jawlines. It seems to me that most people simply don't know how to bodyscape a fat person. When I look at fat people, especially nude photos as from adipositivity, I can see the beautiful lines and curves and think of how amazing it would be to capture this or that just so. Dramatic lighting, shadows falling off into light across dips and peaks. There's just so much on a fat person's body to bodyscape. So much interest as the body changes with every move or shift of position.

The issue of sexualization is an important one in a lot of nude art. While many artists are careful to make a distinction between pornographic photographs and those which are considered artistic, the goal tends to stay along the lines of creating  a sensual photograph, and how on earth could you possibly create a sensual photograph of a fat person? Even considering non sensual nude art the goal is beauty and/or emotion. Again, how could you possibly create a beautiful photograph of a fat person? How could you elicit any emotions other than disgust?

Thankfully artists like this aren't the only ones that exist. I've certainly encountered photographers who were interested in photographing a fat body simply because it's different. Because eventually when you have models with only one body type they all begin to look the same. And that's good. That's progress. To have people recognize that other bodies exist, that they can be shown, and that they can look beautiful and artistic and interesting. But look, artists, can we not hide behind some bullshit faux feminist "celebration of the female form" copout? That's not what you're doing, you're celebrating the hetero male expectation of the female form.
at July 13, 2011 3 comments:

I finally got around to seeing Bridesmaids last night. I had the opportunity to see it before but chose Pirates of the Caribbean instead (in 3D I might add!), but I finally gave in because a friend wanted to see it. I had read previous reviews that touched on the way the fat character, Megan, played by the beautiful Melissa McCarthy, was portrayed. I didn't see many (okay.. any) positive reviews in that regard. I have to say, it wasn't quite as bad as I thought it would be, which isn't saying a lot. The other characters didn't make fat jokes or call her names (not even behind her back!), and she was portrayed as a strong and confident woman who was secure in who she was. That's about where the positives ended though. Firstly, while I usually punch the air when I see gender norms broken, in this case Megan's obvious masculinity seemed to allude to the fact that fat women cannot be feminine or sexy. She was sexual, but it, of course, involved food with her eating a giant sandwich off of the chest of her lover. This may have been less of an issue if every single other female character in the wedding party weren't all hyper feminine and very well dressed and put together. A friend also pointed out that she never appears to wear makeup of any kind while the other women certainly do. The desexualization of Megan as a fat woman is highlighted in the above movie poster where she is the only bridesmaid without a sleeveless dress or a skirt above the knee.
.

And just because the characters weren't making fat jokes doesn't mean there weren't plenty around. When the wedding party (pre wedding) goes out to eat together, Megan runs ahead of all of them to get into the restaurant. At the bridesmaids dress shopping she lifts the sitting couch and then flops over onto it, awkwardly and obviously in  a sort of beached whale style. 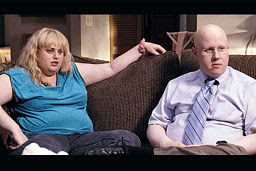 The other fat characters, Annie's roommates (Annie is our Maid of Honor and main character),  Gil, played by Matt Lucas and sister Brynn played by Rebel Wilson are secondary characters so less seen, but when shown are portrayed as weird, bumbling, and unintelligent. The first time we meet Brynn she's gotten a free tattoo out of a van. When she shows Annie it's obviously infected and gross. Annie tells her to put a bag of frozen peas on it or something so Brynn goes to the freezer, gets a bag of peas, opens it, and pours them down her back. All I could do in the theater was facepalm.

I'd also like to point out the difference between the actual body type of Melissa McCarthy and the movie poster, in which Melissa has been visibly thinned in her waist, hips, face, and arms. 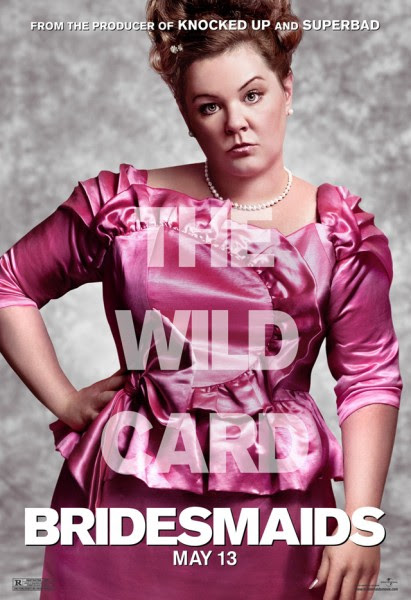 One of the trending hash tags on twitter right now is #fatpeoplenightmares. The idea is posting things that fat people are, apparently, terrified of. Such as walking up stairs, fast food places shutting down, having to exercise, or just always being fat. I don't know about you but my worst fear is a zombie attack or if we're talking about things based in reality I'm pretty fracking scared of the type of world that these assholes create. Anyway, if you have a twitter, log on right now and throughout the day and post anti bullying, pro body or pro fat messages and be sure to include #fatpeoplenightmares. We won't be able to balance it out, but hell, it feels good to protest these types of ignorant and hateful messages.
at July 04, 2011 2 comments: