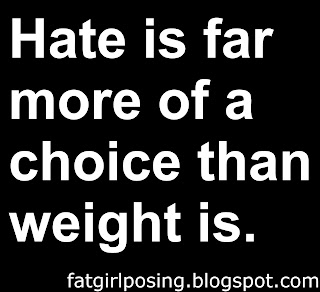 This week I got a comment on my tumblr blog asking if it "glorified obesity" and, worse, claiming that it was "like a pro ana site, but the opposite". *Sigh*. Do I have to keep going over this with people? Yes, apparently so because it will never stop. I know this from what I've seen from other fat activists who have been doing this far longer than I have. The accusation that speaking out for body acceptance is glorifying obesity is a tactic used by pretty much every fatphobe in the book. And not just fat people either. Glorifying has been used in the form of "you're just trying to be superior" against women, against african americans, and against pretty much every marginalized group.

Here's the thing, glorifying obesity, if you pay attention to what the trolls are claiming, is something that you do by simply existing. In the same way I guess I'm glorifying being a woman, being white, being vegan, being a scrapbooker, and being a singer. Who knows what else I'm glorifying over here! More so, it's the act of not being ashamed, not pitying fat people, not hating them or yourself, that glorifies obesity. If that's the definition that we're going with then yeah... yeah I am glorifying obesity and we should do a hell of a lot more glorifying obesity!

As for my blog being like a pro ana site, well, you see the logic they're going with here don't you? All fatties must overeat therefore it's an eating disorder because, you know, all fat people are alike. This is what bigots do with every group they choose to hate. They stereotype and put people in boxes of undesirableness in one way or another. This particular bigot (and many others like them) chooses to hide behind health (because over eating means you're automatically unhealthy, didn't you know that?). But the rub is, of course, that not all fat people are over eaters and some thin people are. They are literally ignoring and pushing aside every thin person who suffers from BED (binge eating disorder). They also ignore every ED that any fat person does have that isn't BED. To them the world is black and white- at least when it comes to fatties. They steal our humanity, our individuality, and shove us in cages labeled lazy, unhealthy, overeaters, greedy. To be clear- Being Fat Is NOT An Eating Disorder. Not anymore than being thin is an eating disorder by itself. Fat people don't all share the same behaviors, thought processes, lifestyle choices, or anything else for that matter.

So go forth, glorify yourself and glorify obesity. Because hate is more of a choice than weight will ever be.
at October 26, 2012